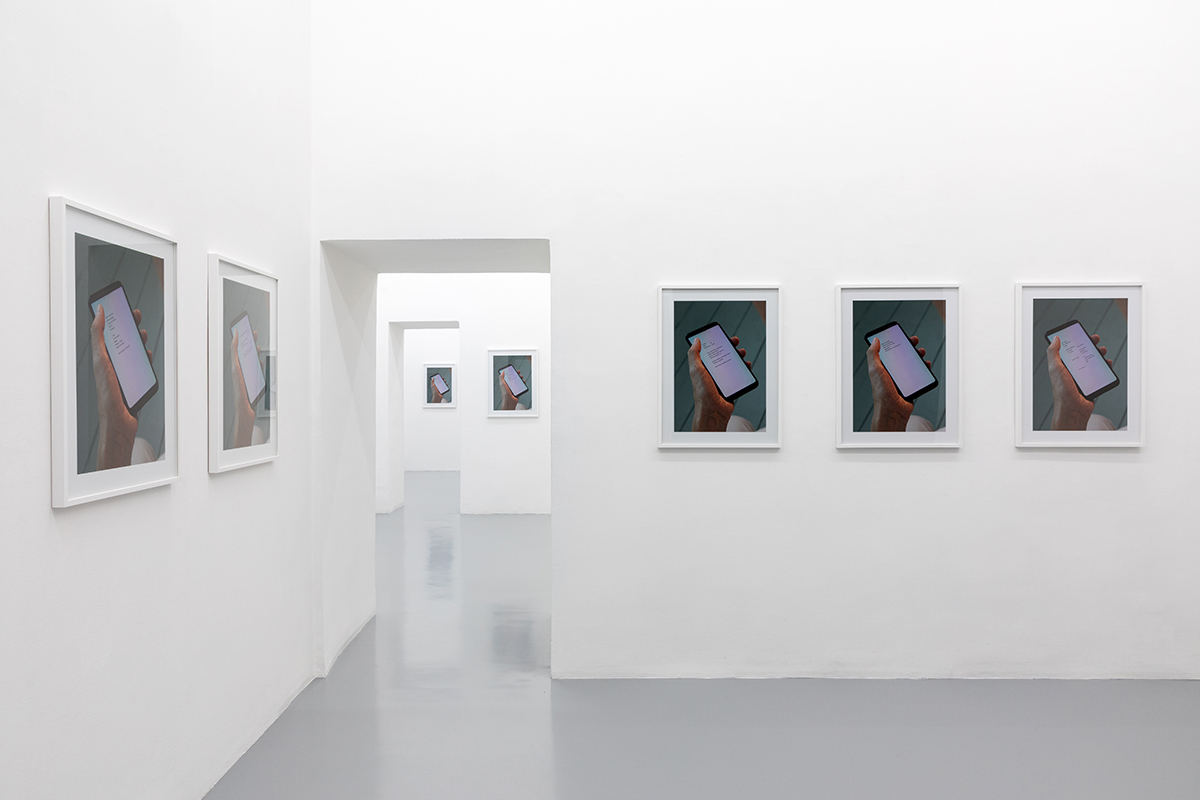 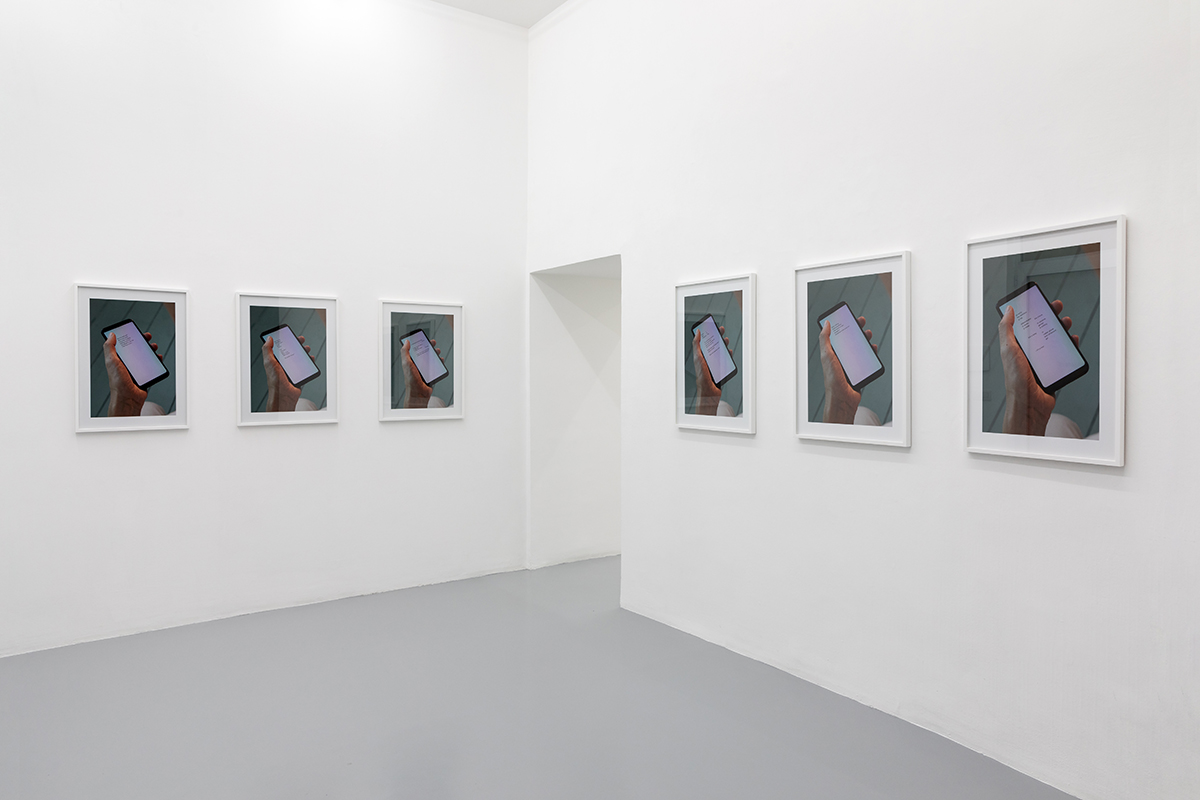 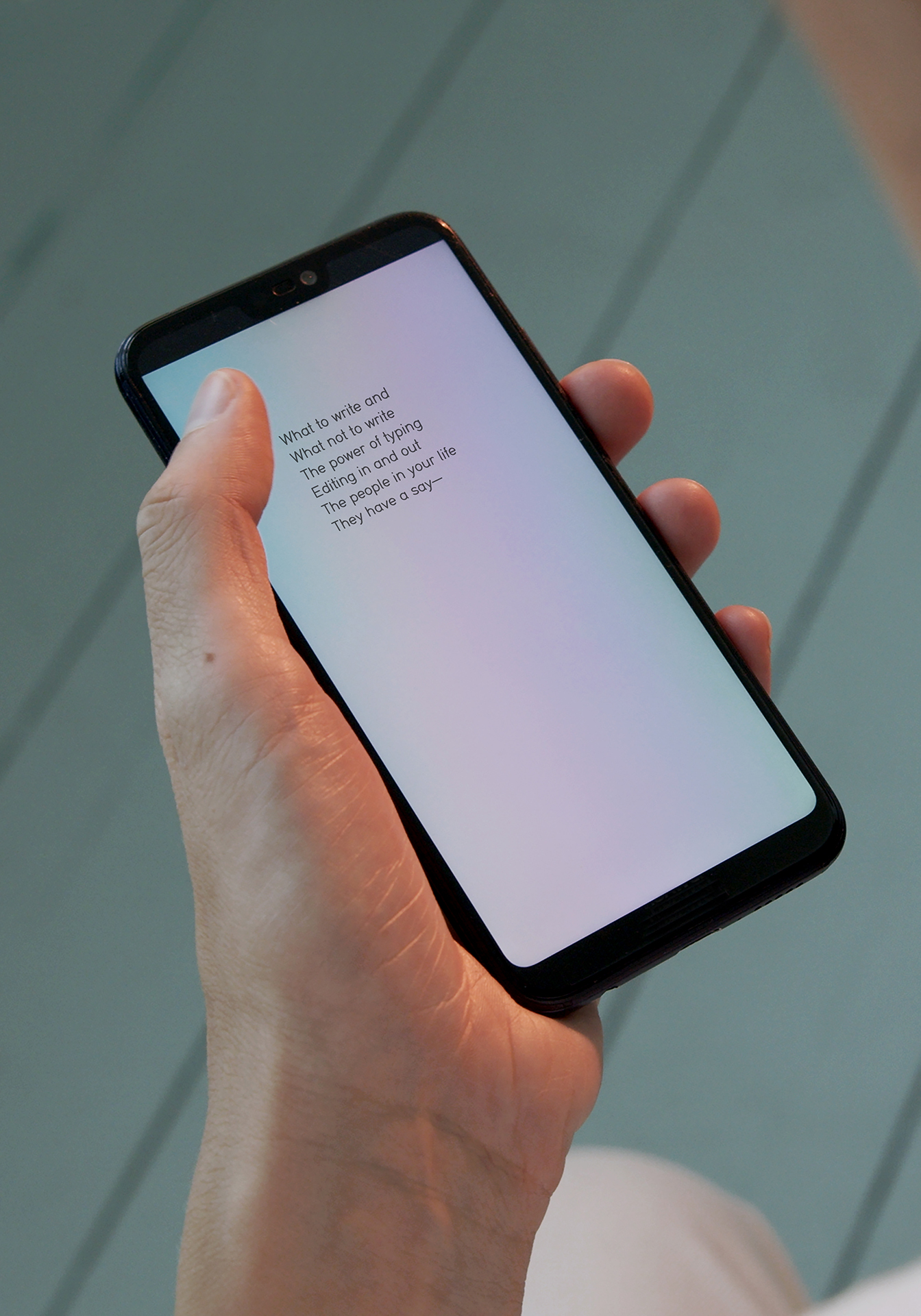 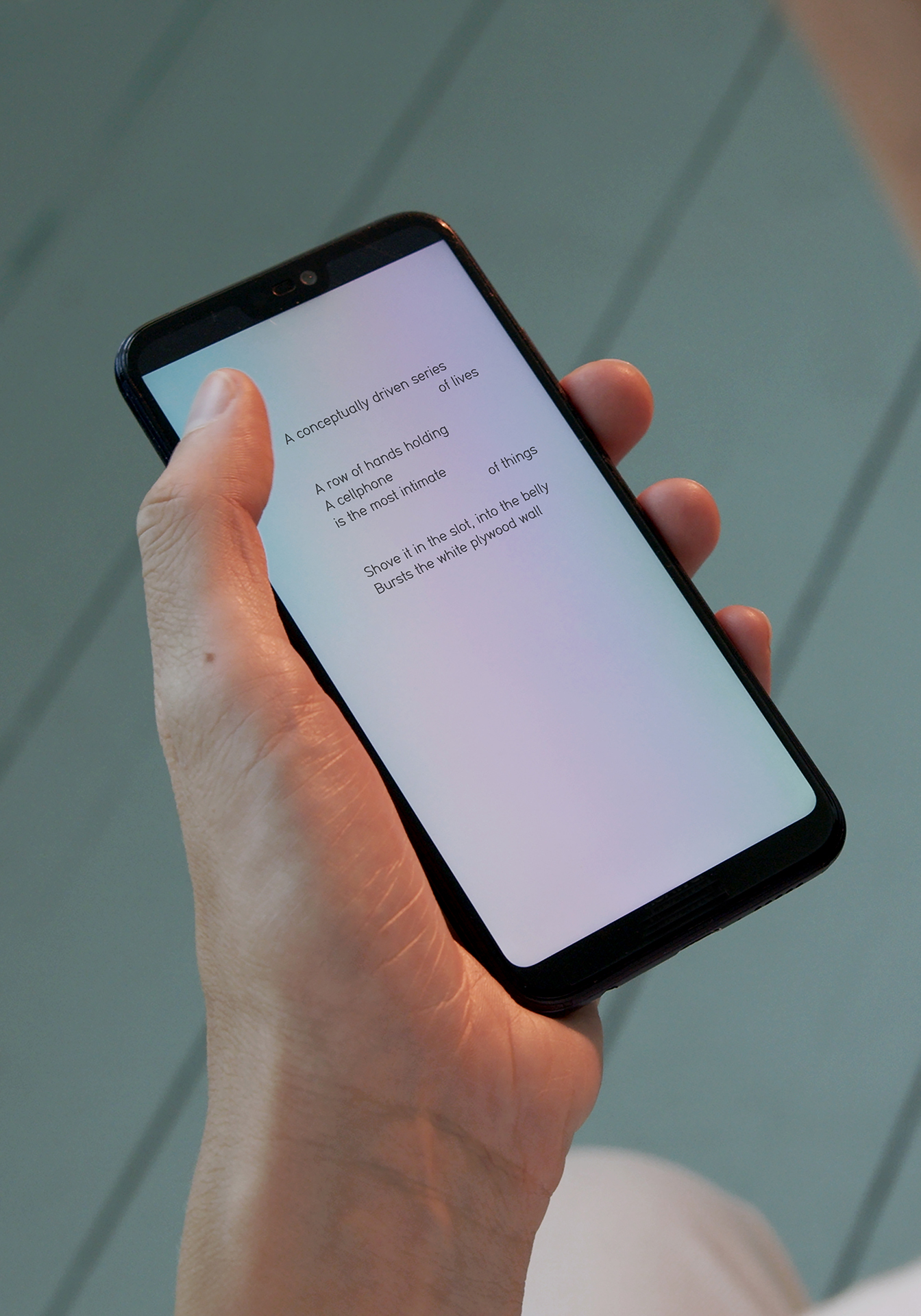 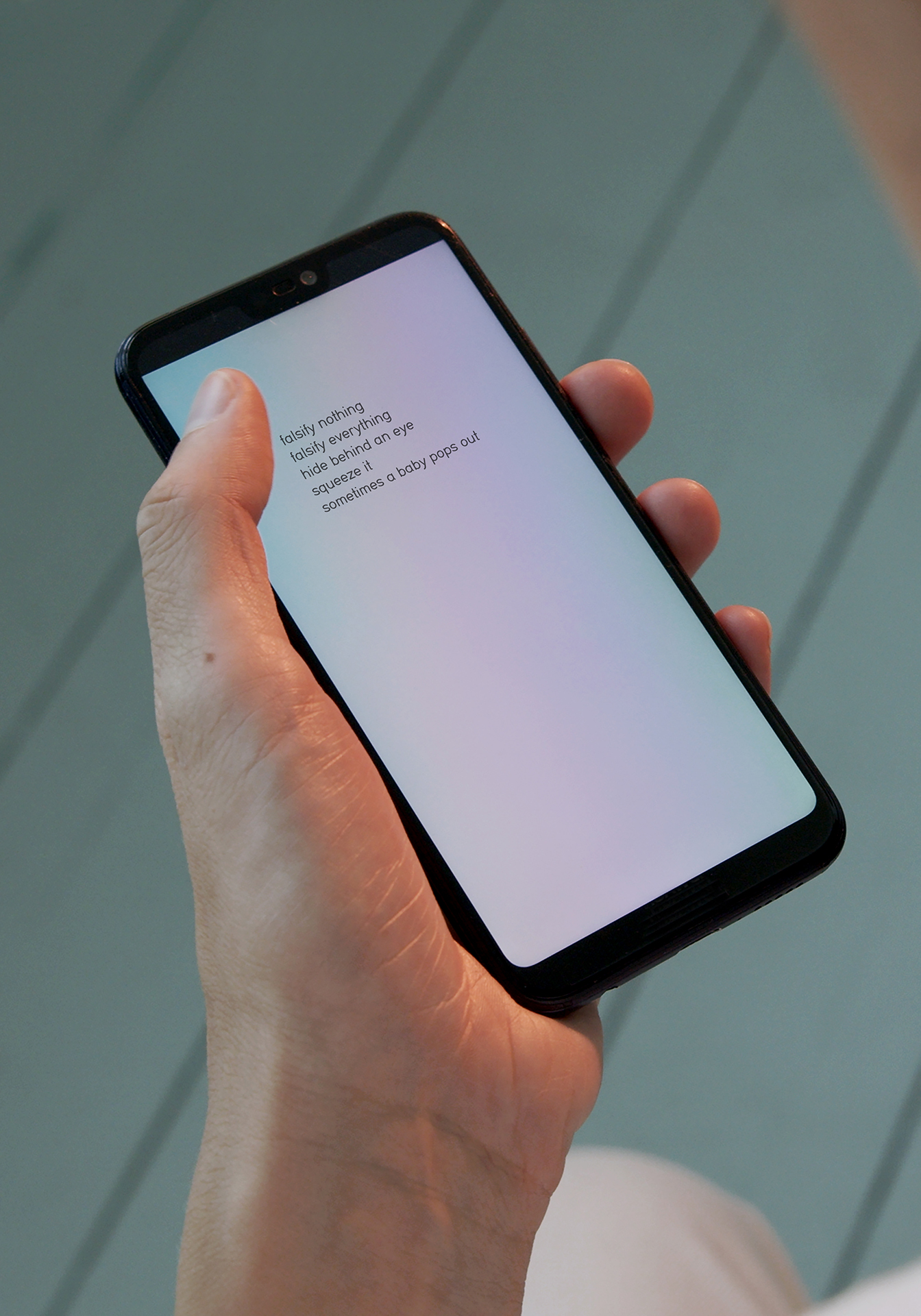 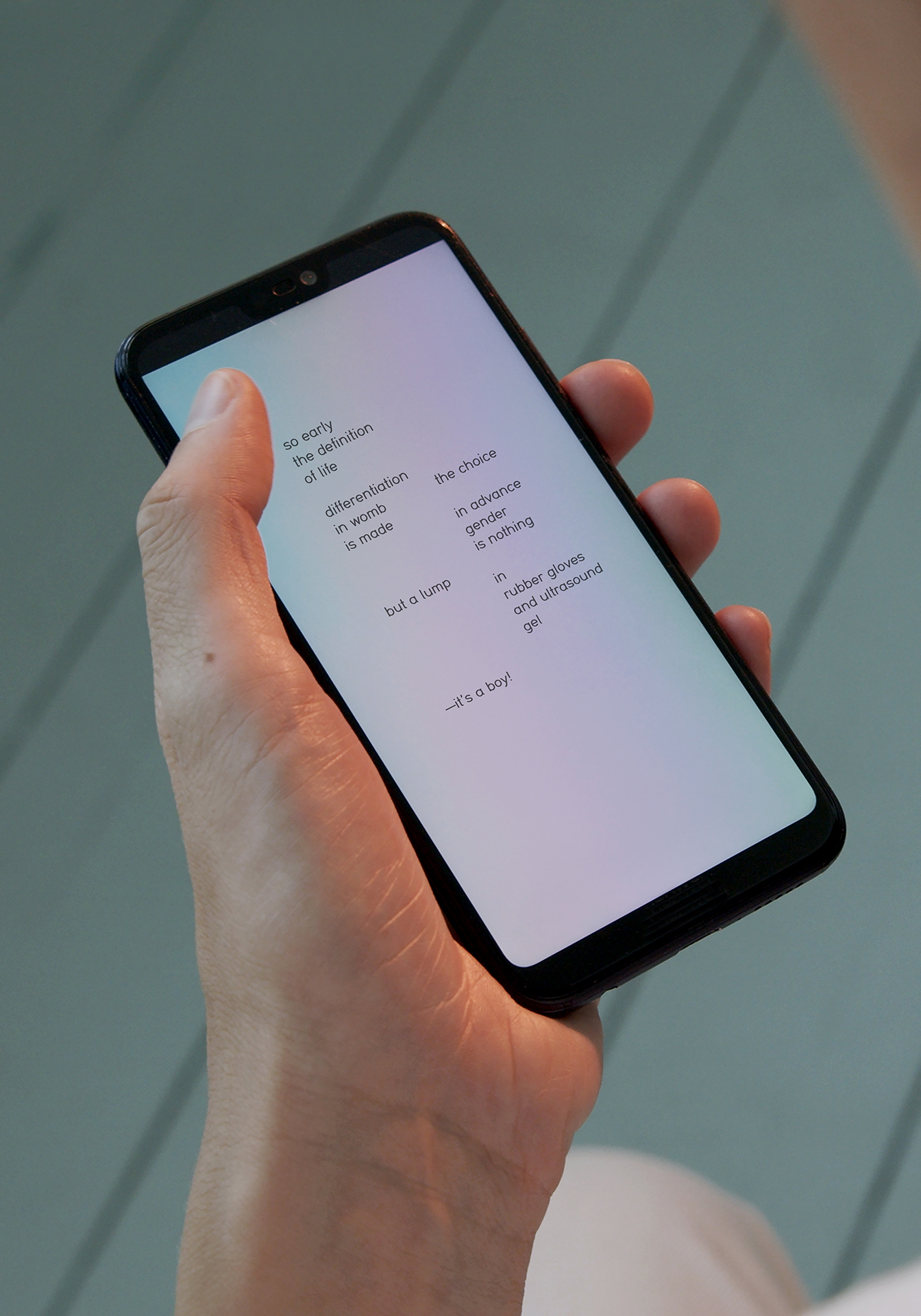 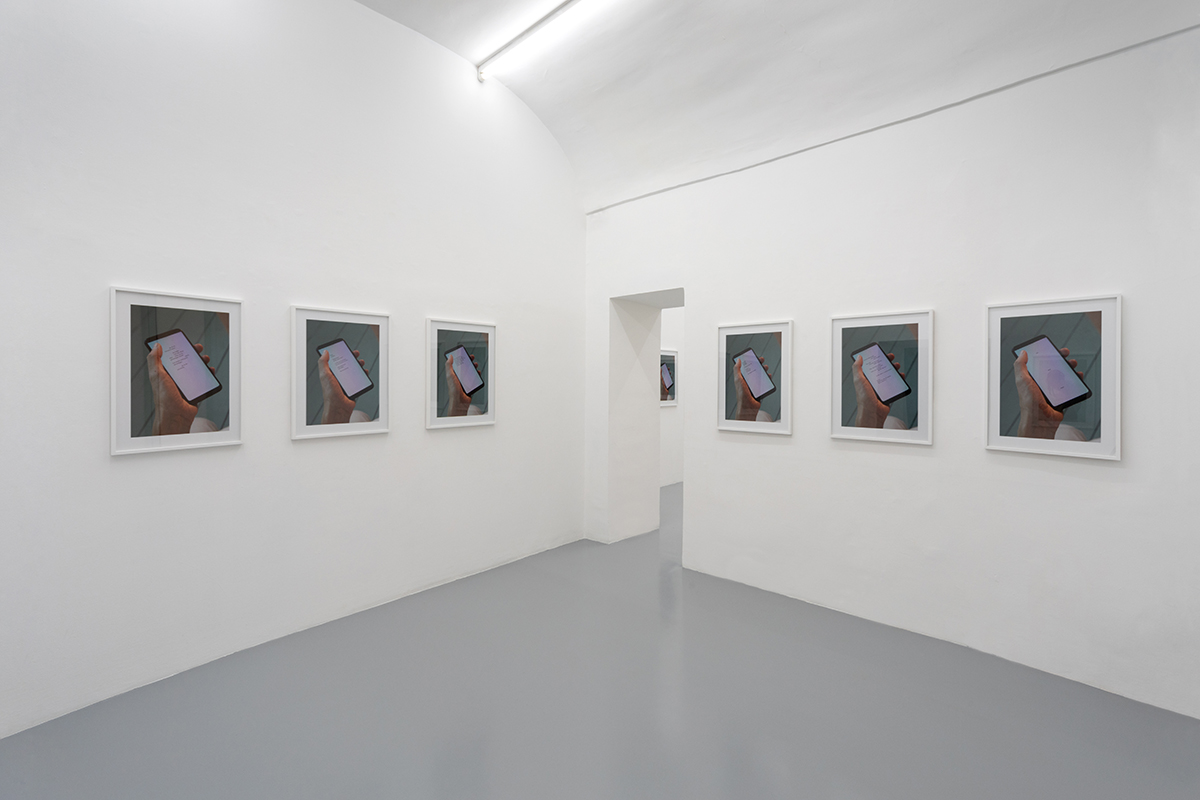 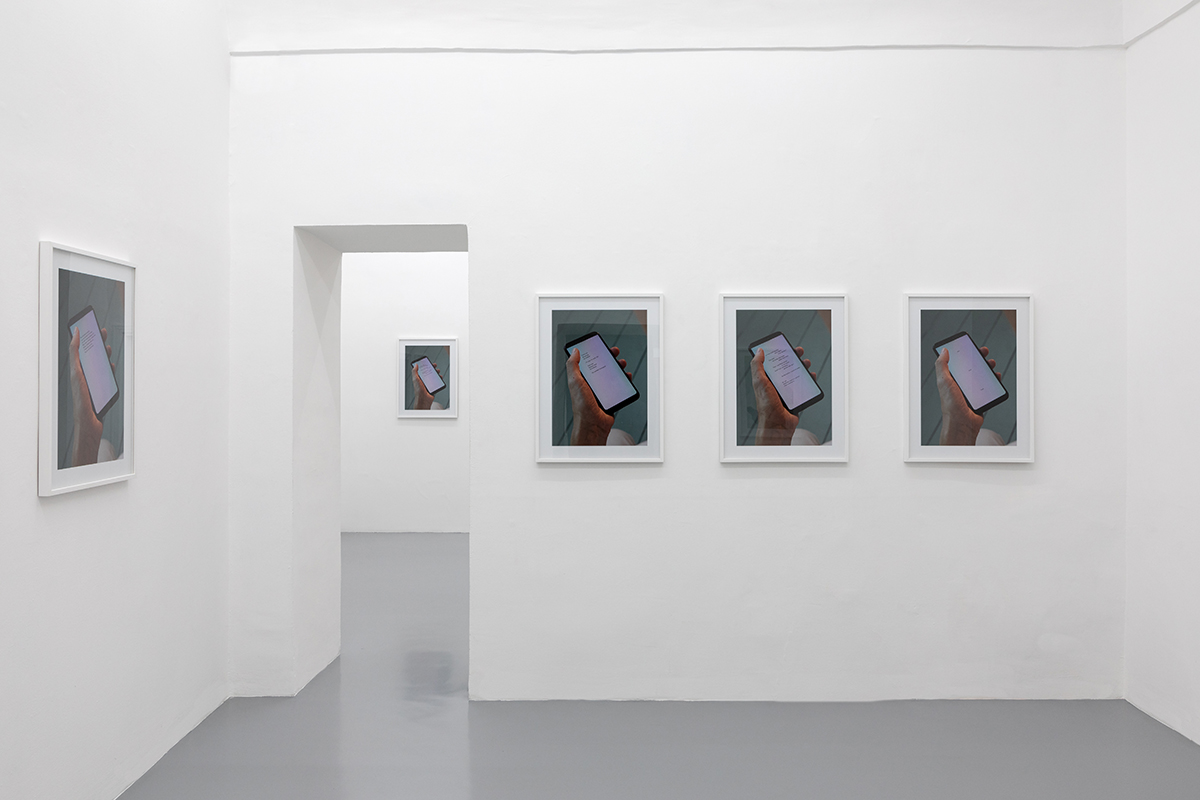 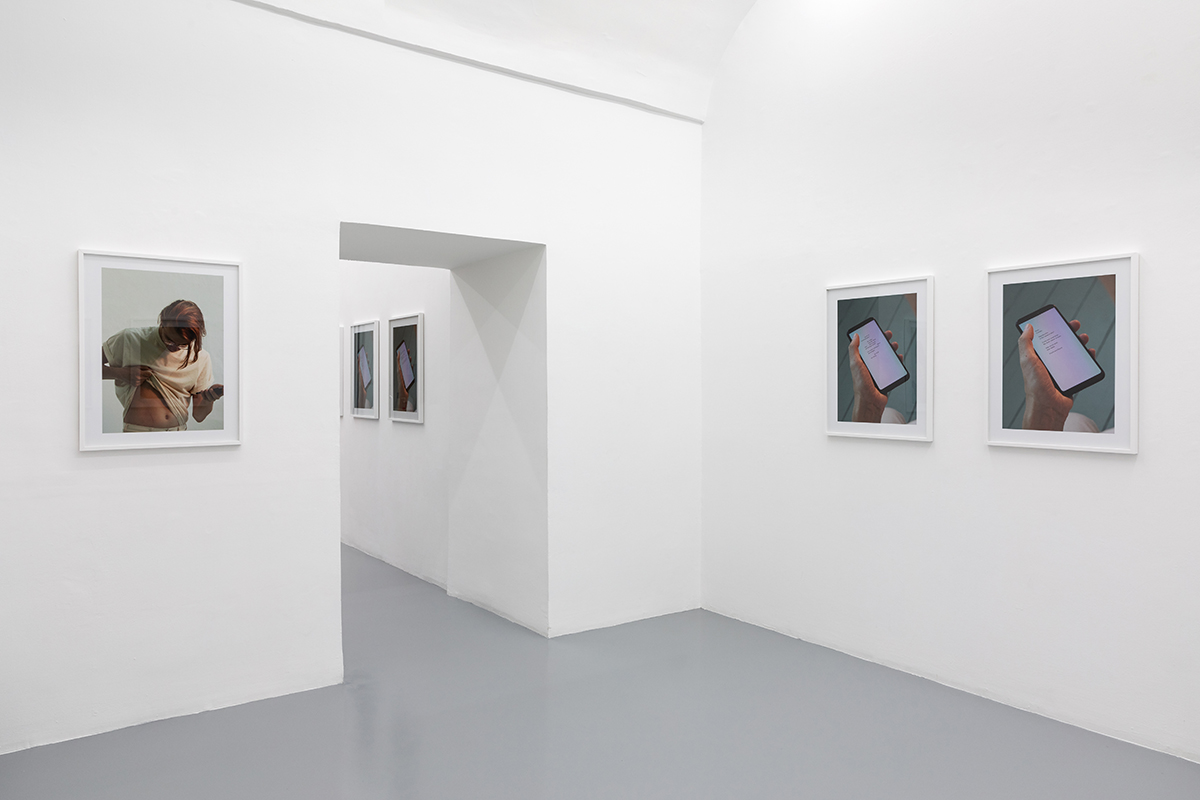 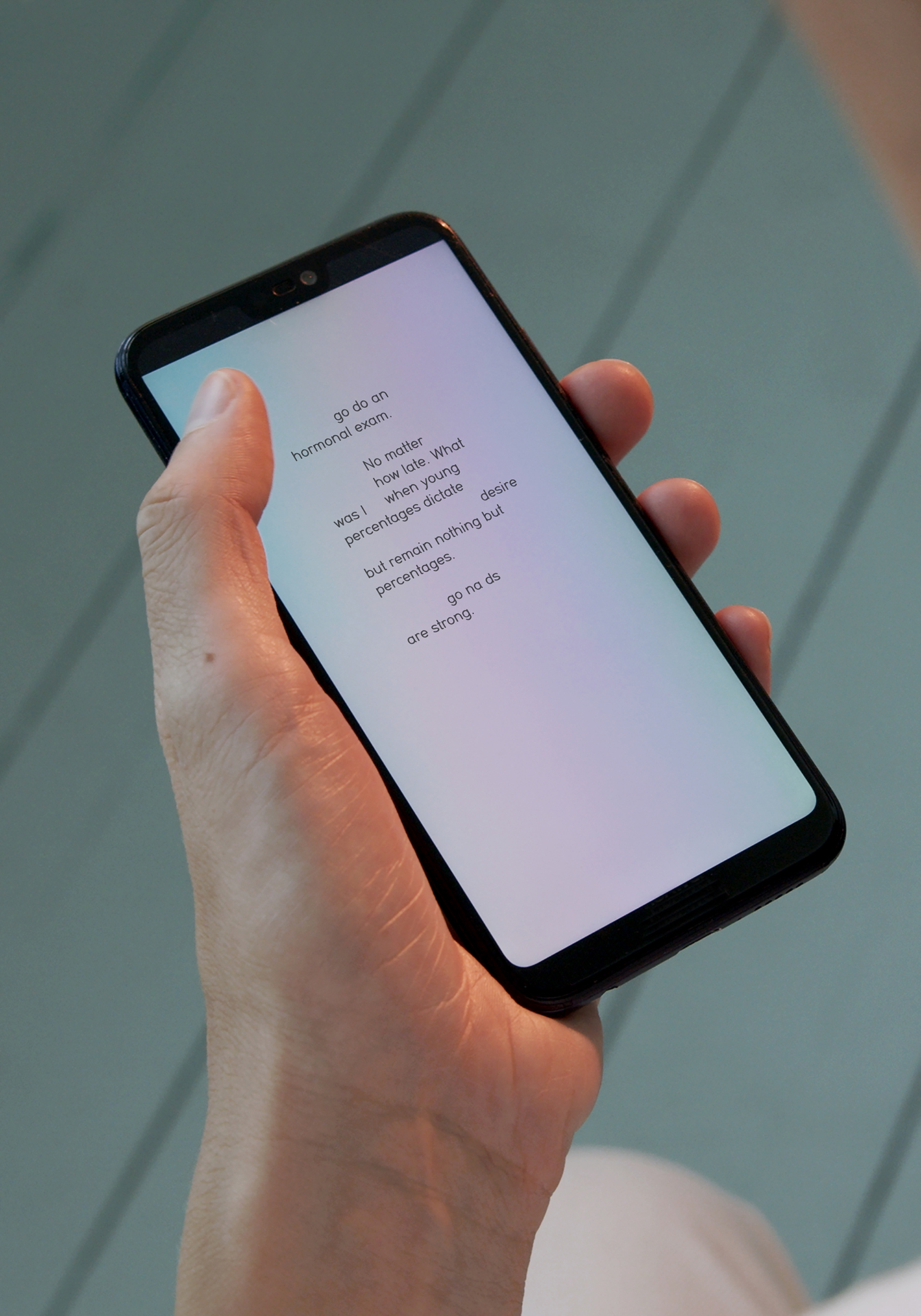 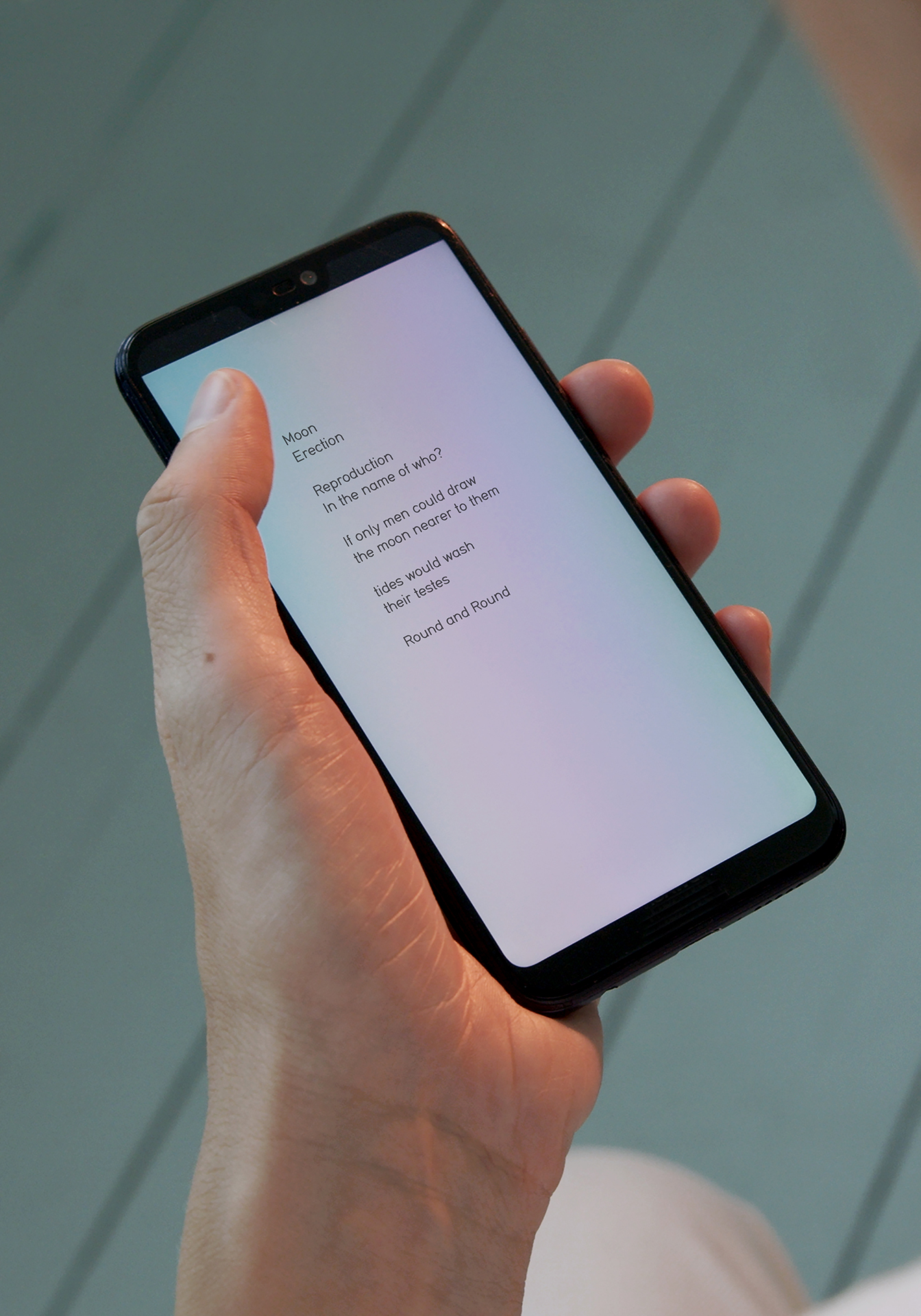 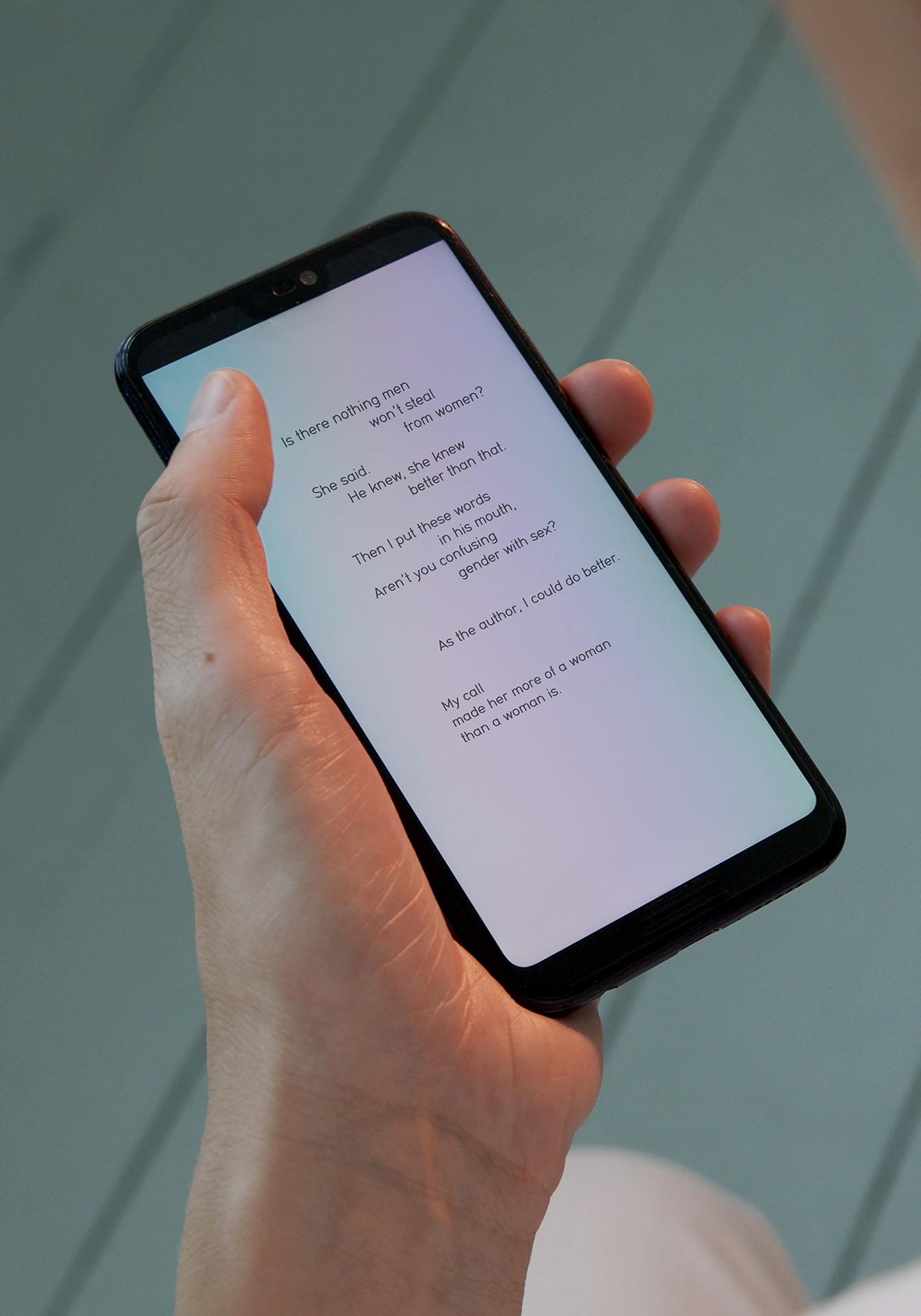 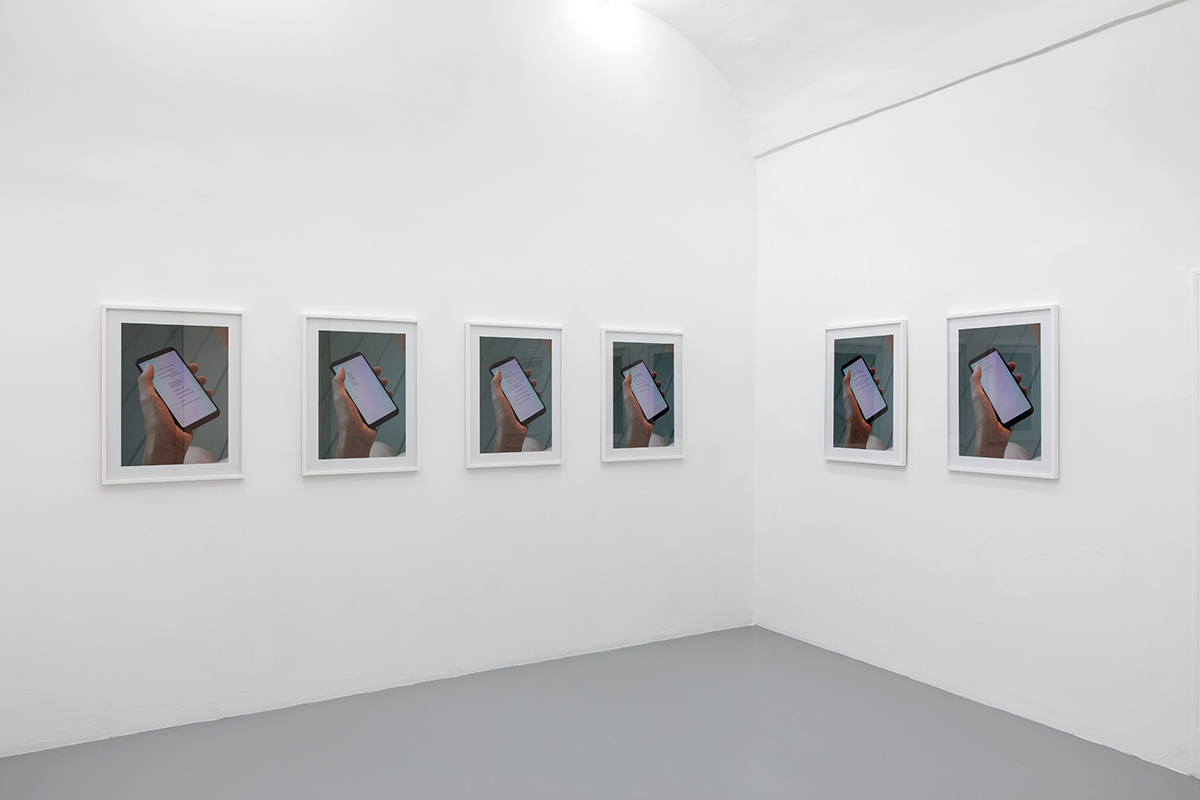 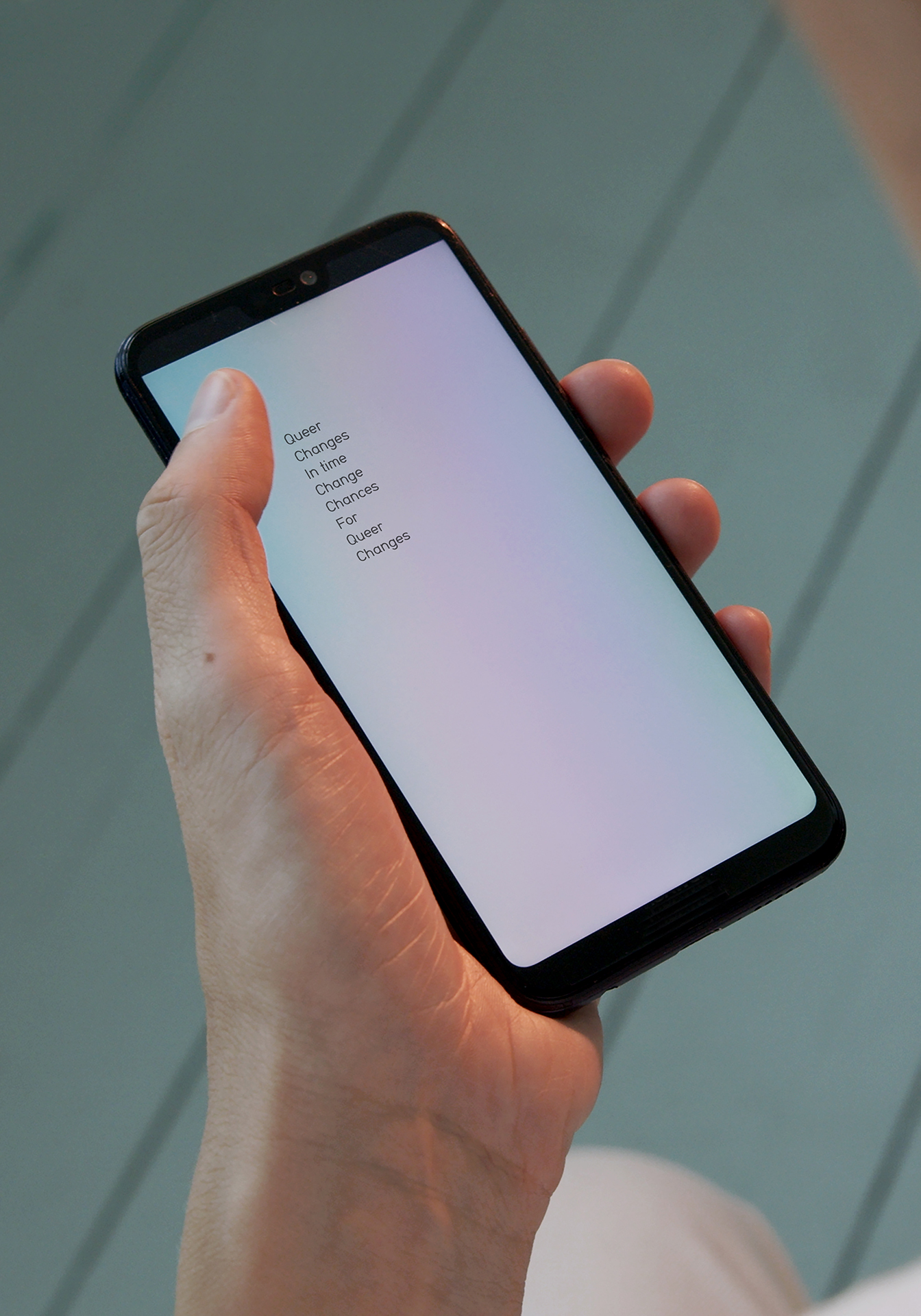 Autofiction Poems
(the above is a selection of the entire piece)

Autofiction
Do people change?
Shove it in the slot
fMpreg
Falsify Nothing
It's a boy!
Gonads
Moon Erection
I know who you are
Art and Hurt
Wasted Insemination
Confusion
A human has no organs
Queer Changes
sox9 vs. foxl9
Privileges
9 months
Banality


This series of photopoems repeat the same photograph eighteen times, each time with a different poem written on my cellphone, as I hold it in my hand. The photographs are shown in a tight row along the gallery walls. The poems are brief and address personal and political tensions behind autofiction, gestation and reproductive rights, non-binary and genderfluid politics, male desires and the limits of good liberal intentions. The series is intimately related to the installation Becoming Male in the Middle Ages (2019) in collaboration with music producer HAUT.

"The project that Pedro Neves Marques conceived for the exhibition is based on the research they have been doing on advances of reproductive technology, which nowadays is changing incredibly fast. The theme of reproduction and normative bodies is present in many of their films, through the analysis of agricultural seeds, the sexuality of the plants, and relationship between machines and nature. With the project Becoming Male in the Middle Ages, exhibited at Castello di Rivoli in 2019-20, they started to work on the idea of a fiction, creating a different narration about ovarian transplants and a possible future where men can produce ovules.

'Autofiction' continues this path; a fictional work, but not that far from the research being done on hormonal therapy and transplants.

This imagination is aimed at developing the possibility to think about the power dynamics between genders: who owns reproduction; the history of science and men controlling women's lives; the reduction of the gender "woman" to biology (that is: woman as the human that reproduces); how all of this is in tension with the current normalization of gay culture and how the rise of trans and non-binary lives is changing cultural and gender roles.

Lastly, they decided to insert their own private life in the work, in a mix between reality and fiction, truth and lies. That's why they chose the title Autofiction. Not biography, but not absolutely fiction too. As a constant writer, which ends up in books or in many of their films, for them, poetry is something that is at the same time the most direct and the least direct way of talking, thinking, and feeling about this. Poetry is the space of revelation and non-disclosure; of wittiness and blind spots. It is the practice of detail.

At the gallery we find an autofiction in the shape of an installation of eighteen poetic compositions, divided into six photos per room, filling the entire gallery with an obsessive repetition or a hall of mirrors. Each photo, however, has a different poem, a different reflection. Breaking the apparent repetition of the photo-poems, a picture of the artist's body showing what appears to be an implant in the belly (again, fiction or lie?). The smartphone and the artist's hand change into the narrative frame of the digital poems.